Be the first.
Everyone who has played “Cowboy and Indians” as children knows: who is annoying, gets the scalp. No idea what the Fattyslick hired, but his hairstyle convinces: not the smallest elevation disturbs the regular appearance. Smooth as a Babypopo, it stretches over the rim and is thus an Exot among the Exotics: a washable Slick in a full 4.5 inches width.
Good for Dragster. Or FATBikes! 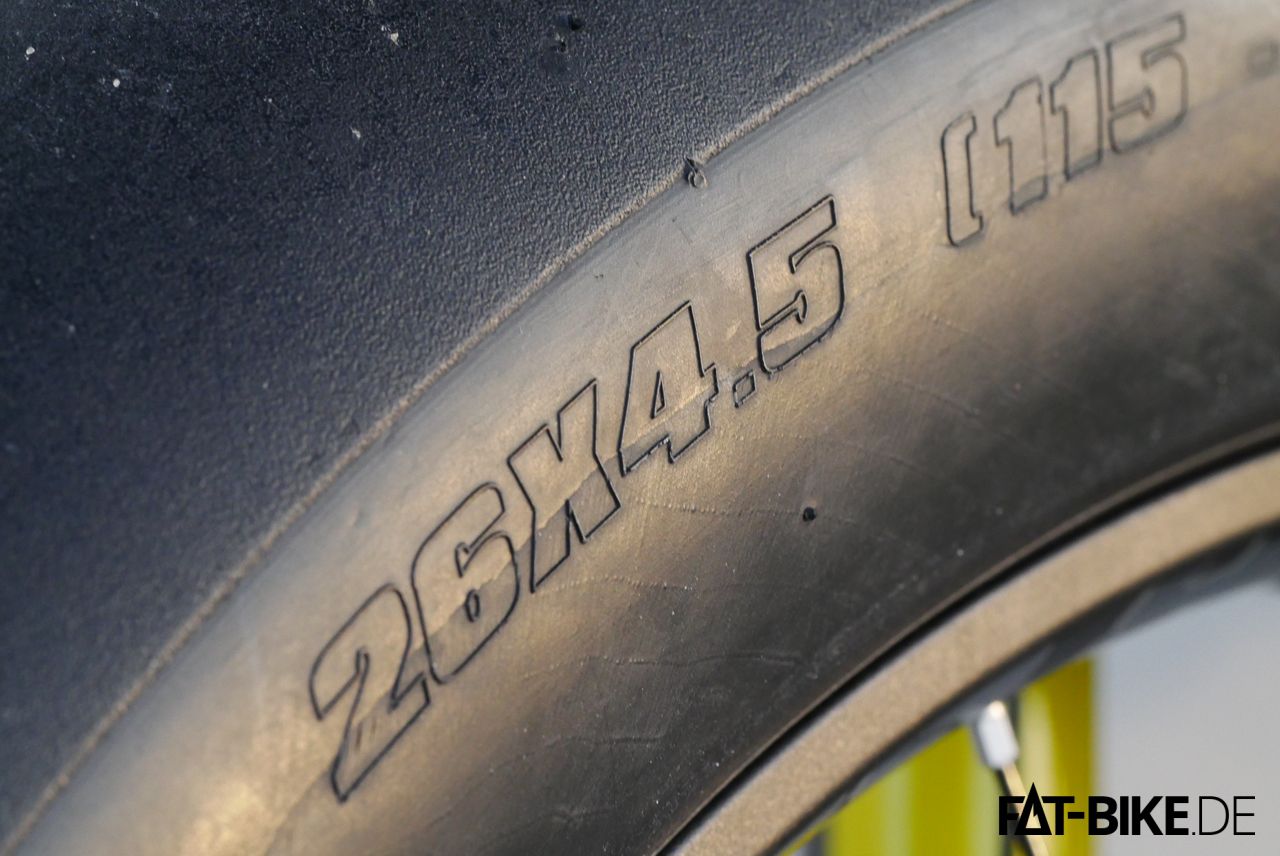 The Apache Fattyslick looks as if you had crossed a race bike with a sperm whale: he looks fast but looks incredibly FAT! The crisp look reminds us almost a bit of good old dragster. Let the good times roll! Without a doubt: he’s the style check!
Outside, hui, inside! 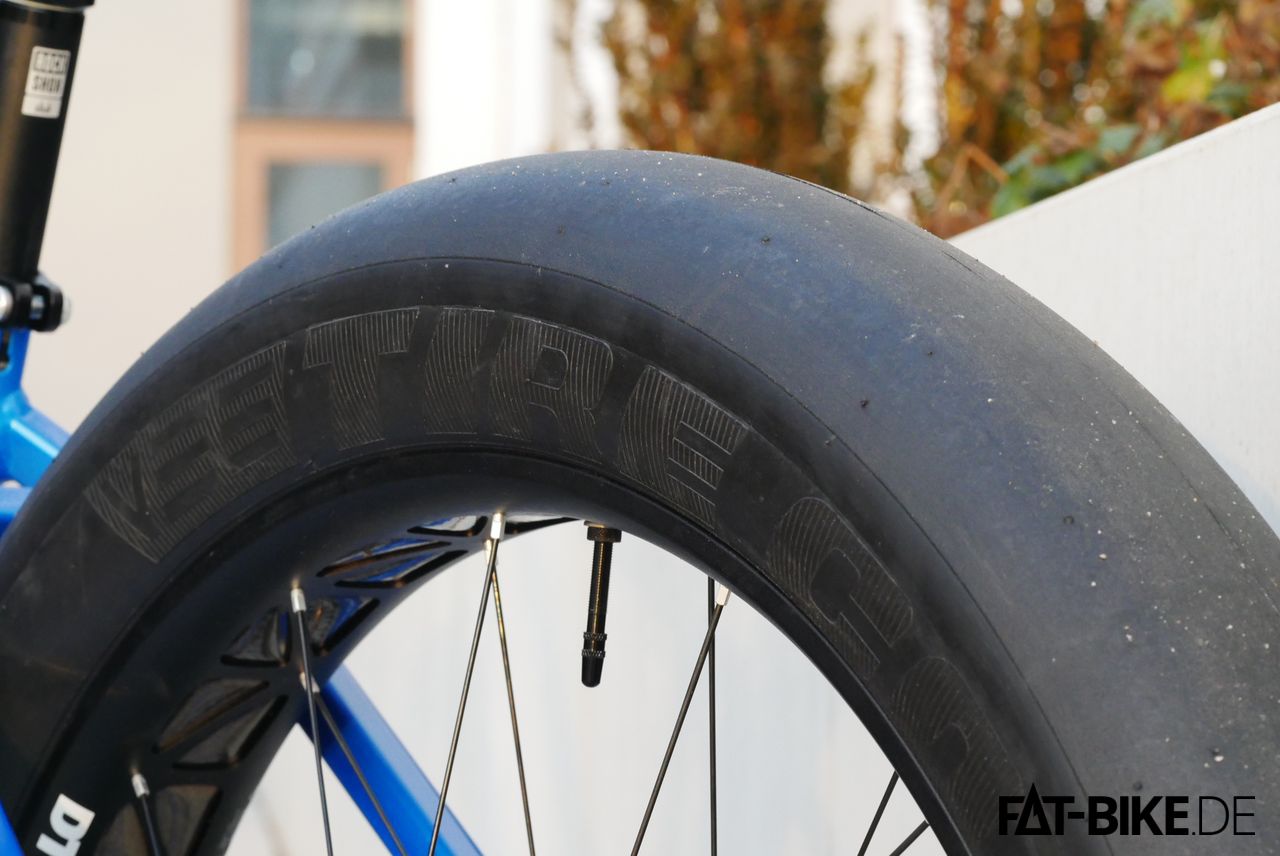 Also a little dragster look: the huge lettering.
The Apache Fattyslick is, contrary to our expectation, no real lightness. Grandma’s kitchen scales remain only at 1,230 grams, so he is significantly heavier than he looks.
The reason: unlike in the case of tunnel tires, the tread does not have pimples, which rise like a protective shield above the carcass. This is where every small piece of stone is pressed directly into the tread. Therefore, it had to be designed thicker than usual – in favor of safety. The studs were therefore not cut off but smoothly ironed. 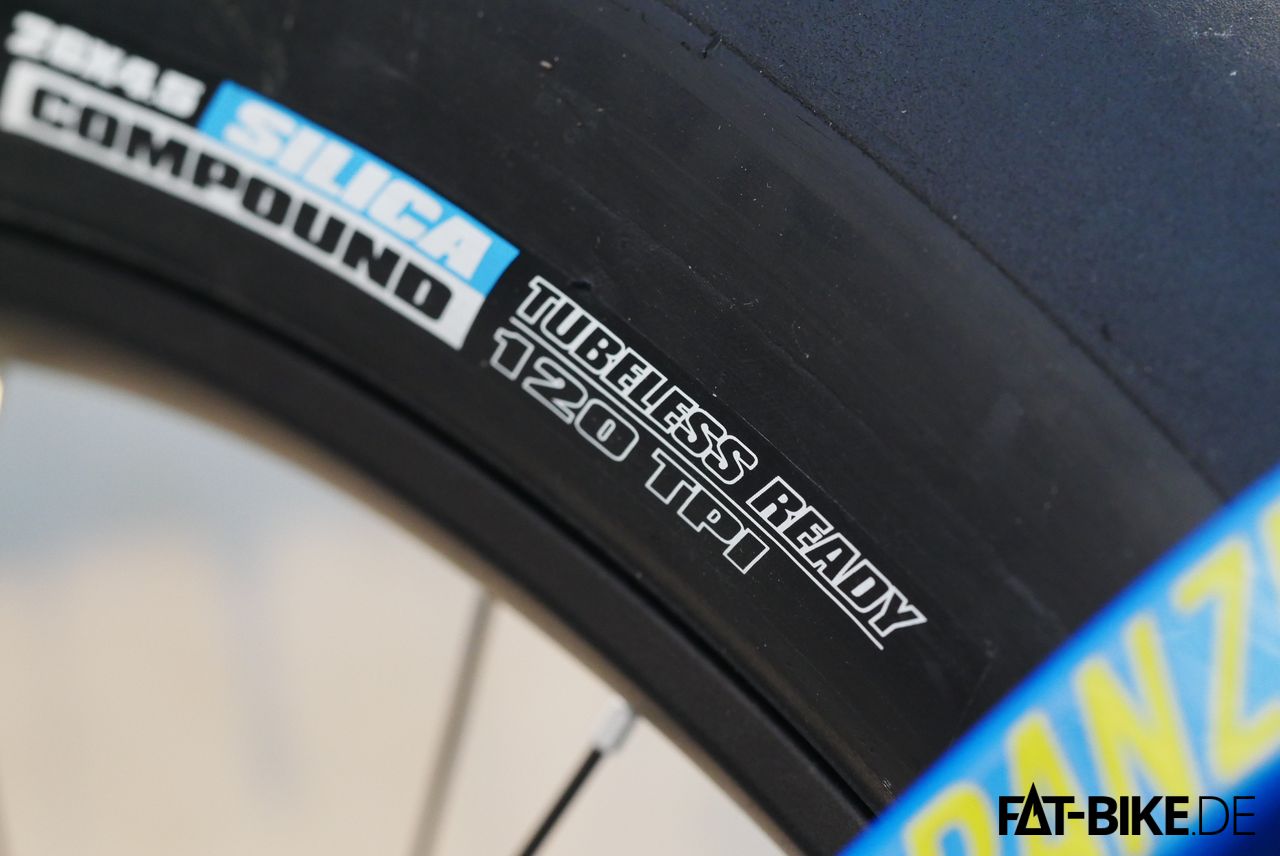 Everything in it…
The further structure is based on Vee Tire’s well-known pattern: a lightweight 120 TPI carcass is held in shape by foldable kevlar rings. The rubber features the well-known high-quality silica blend and all the necessary features for a tubeless mounting. Its dimensions are in the standard standard: at 0.5 bar, it builds smoothly 8cm high (from the top edge of the rim flange) and 10.9cm wide
So also a “Thumbs Up!” From technical side!
Arrowhead: the Apache Fattyslick! 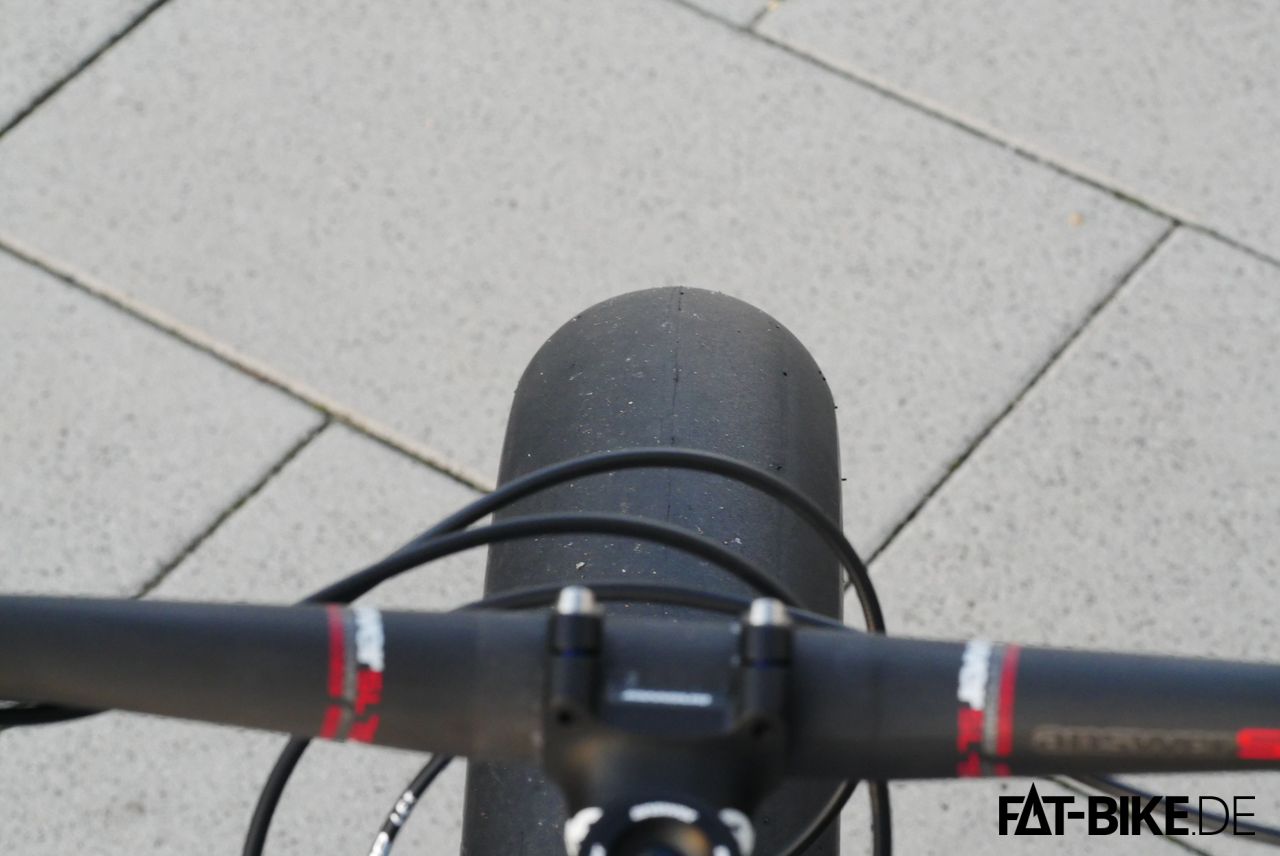 View from the cockpit: nice round, the thing.
But how the hell is a racing bike in the format of a grown crawl? To find out, we have strapped the Apache Fattyslick tubeless onto the 80mm wide DT Swiss rims of our Mondraker Panzer RR and inflated with 1 bar of pressure. Yes, the Apache works best under high pressure. It may also be 1.5 bar or more. But be careful: in particular, carbon rims often only have limited tire pressure. So before you get out with the air pump, check out what the rim can withstand! 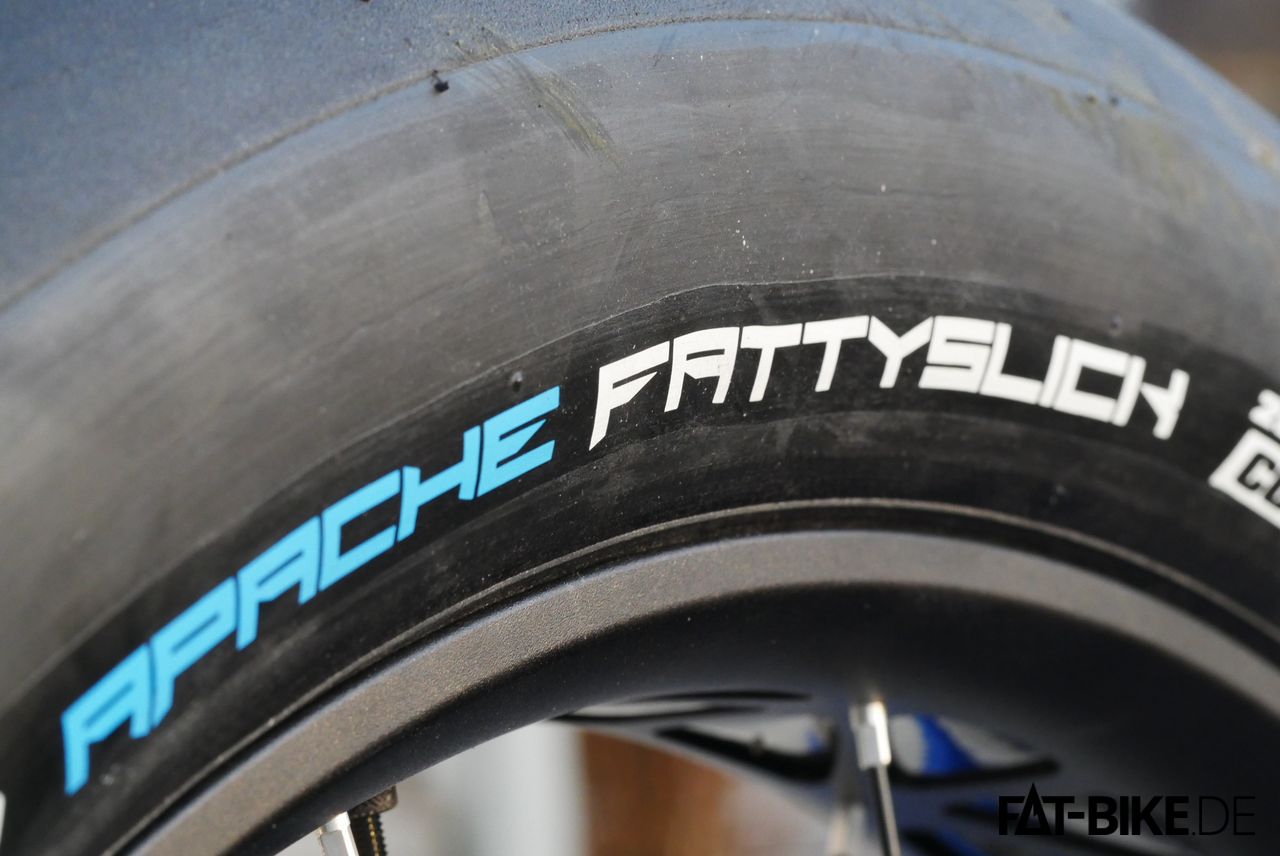 The tread runs widely into the flanks.
Already when starting off the first Aha effect: although he does not feel quite as light-footed in the acceleration as many lighter tires. But Apache Fattyslick does not bend at the start. The propulsion is so incomprehensible directly as otherwise only with the road bike. One is fast very fast and keeps the speed effortless. As expected, the rolling resistance is also extremely low. 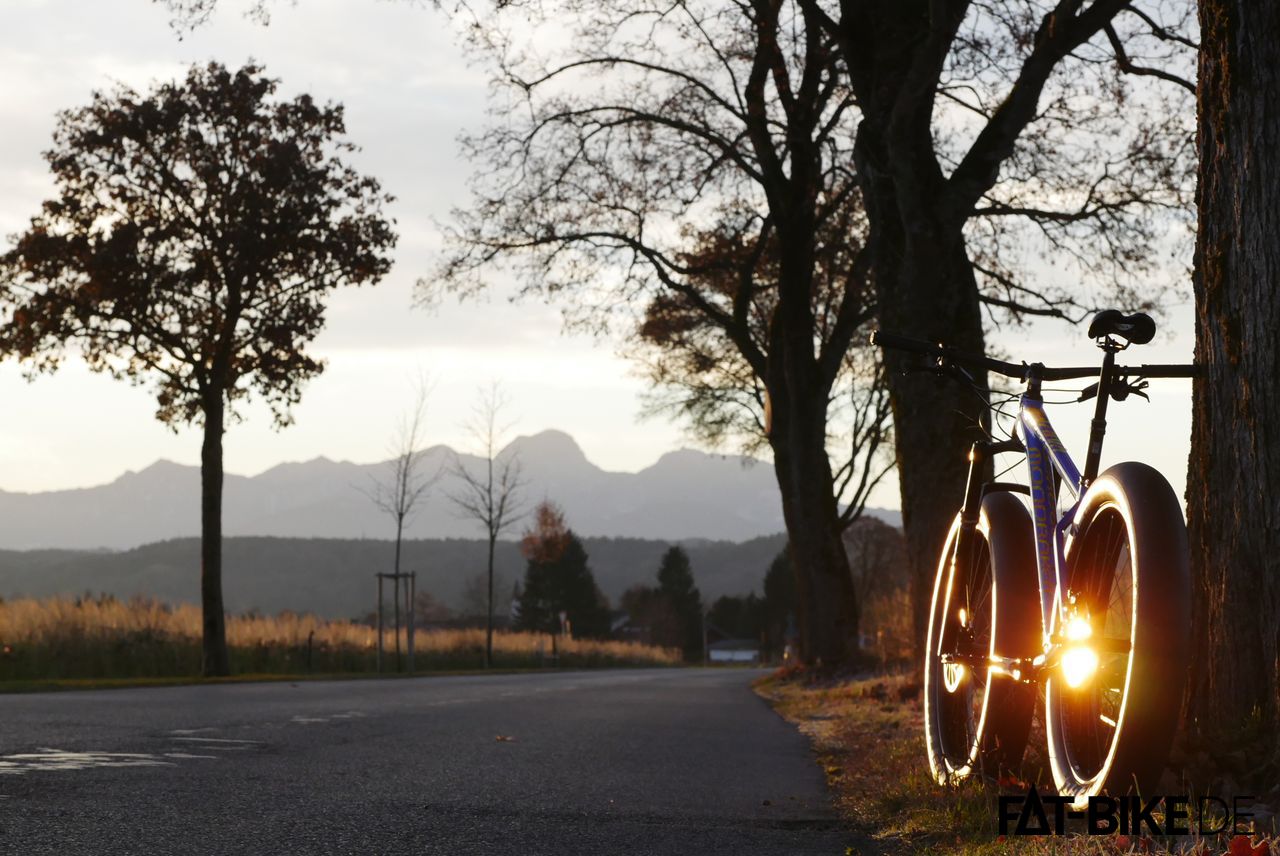 The Indian from Taiwan is by no means as quiet as one might think. The Fattyslick replaces the usual loud growling of FATBike tires with a stench, sipping sound, depending on the background. This is much quieter than before – but does not sound less threatening!
Thanks to the above-mentioned thick tread, the Apache Fattyslick also easily runs on forest and dirt roads.